What is this project about?

Those Docker images are rebuilt monthly to incorporate maintenance and security updates and distributed via DockerHub:

The images can be used by Docker (= Podman) and Singularity. In the end of this article, some recommendations and experiences regarding the tools are given.

The following figure summarizes the available Octave Docker images and their dependencies. 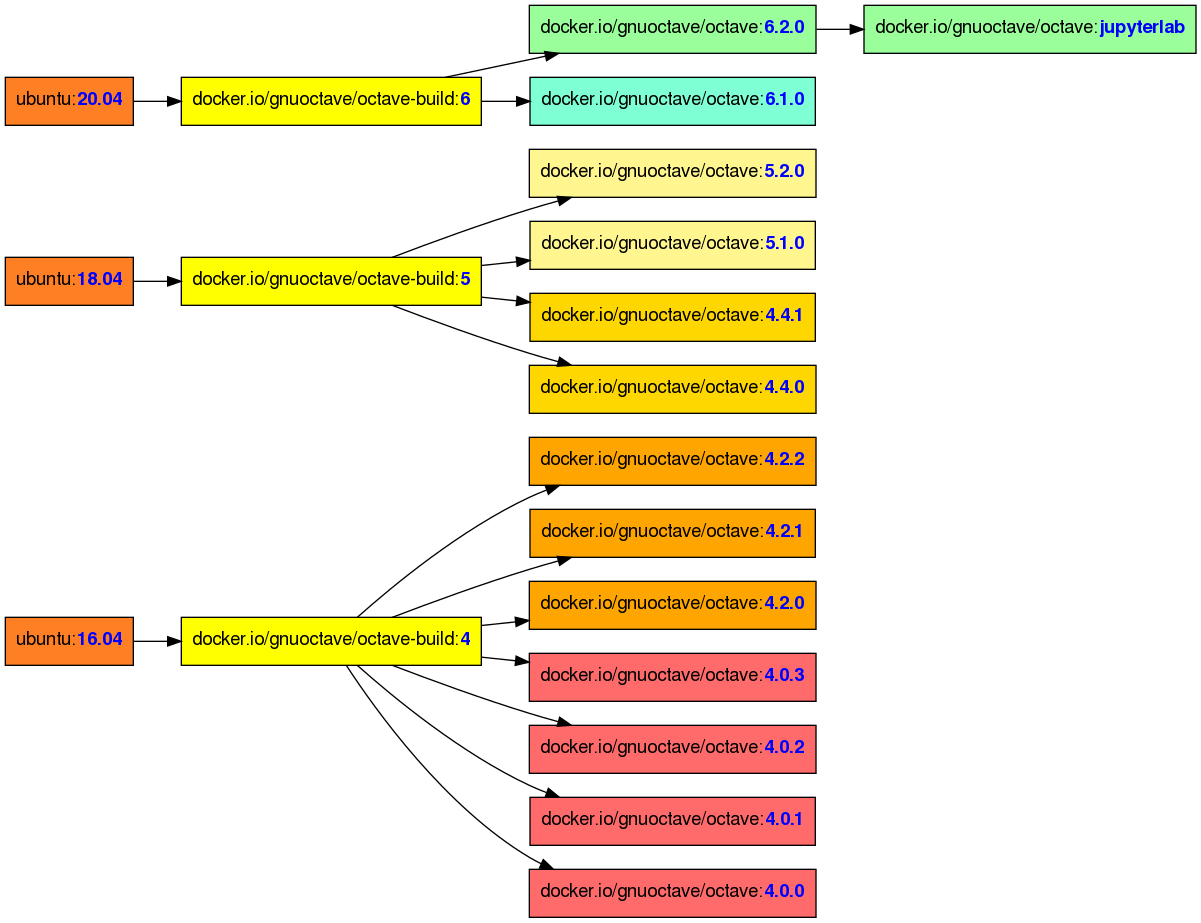 What makes this project different?

The Octave Docker images are created with several usage scenarios in mind. 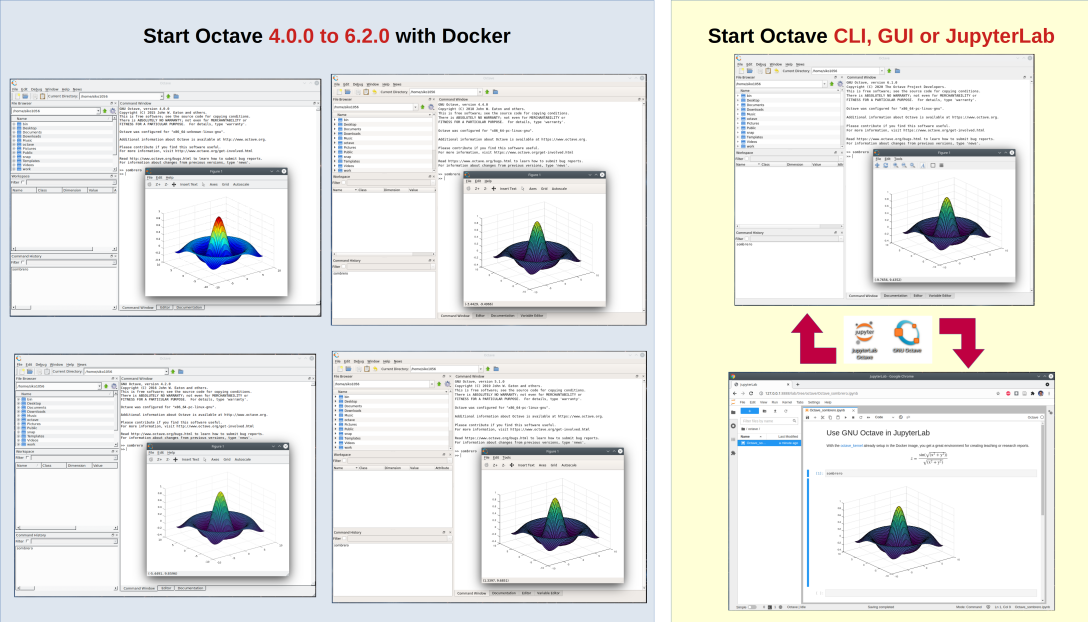 Customizing the images or “your own Octave”

When starting this blog post, unfortunate news regarding the shutdown of the “free” DockerHub Autobuild service were published.

It took lots of time to get the Autobuild setup right and it was planned to advertise it in this blog post as “the way” to customize and publish Octave images. Many thanks to the DockerHub maintainers for their great service. It is a shame that free services are being misused.

If the choice of bundled software or configurations is not satisfactory, there are options for customization:

The easiest task is to add to the existing Octave Docker images. This can be done by a Dockerfile:

Finally the customized Octave Docker image can be build locally with the docker build-command or by using an automated build service like GitHub Actions.

For example, building all provided Octave images using GitHub Actions takes about three hours. As one can see in the next figure, extending existing images is much faster (the JupyterLab extensions takes just 3 minutes to build), as most of the “hard” work is already done. 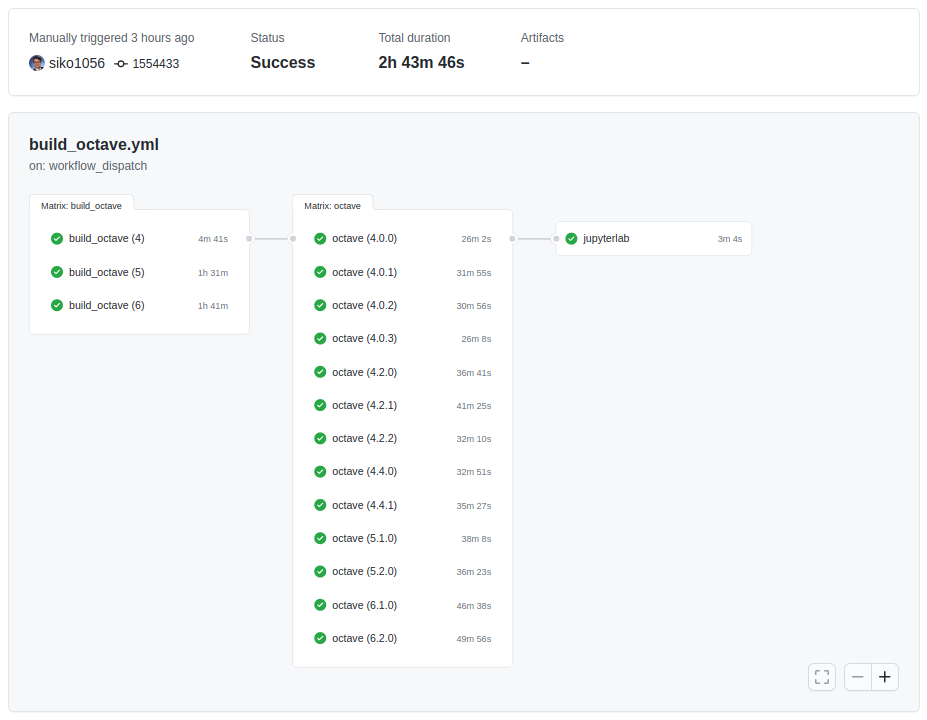 To change the existing Octave Docker images, it is recommended to copy the Dockerfile(s) of interest, to modify and build them (locally or by an automated build service).

What is remarkable about this approach is that uploading those customized images makes the installation as easy as with the already provided Octave Docker base images of https://hub.docker.com/r/gnuoctave/octave. In particular, there is no need to beg or convince distribution maintainers to regard own desired customizations.

Even though containers are great to become independent of the host system, some elementary requirements remain, such as the Linux kernel. RHEL/CentOS 7 uses Linux 3.10 and is a dominant distribution in many companies and universities until the end of life in June 2024.

All Docker images up to Octave 5 work on RHEL/CentOS 7 without problems. In contrast, Octave 6 images (and all newer Octave images in the future) use Ubuntu 20.04 as base image. The qt libraries of Ubuntu 20.04 are compiled using a Linux kernel feature, which is not given in Linux 3.10, and any attempts to start the GUI or print graphics will end with this error message:

If you only use the CLI version for computations and avoid graphics (which is an unrealistic use case for a desktop installation of Octave), you can sneak around this limitation.

As described in the last section, you are free to customize and publish Docker images building Octave 6 based upon the docker.io/gnuoctave/octave-build:5 image.

For the average user both, Docker and Singularity, perform equally well. Docker is to favor, when the intention is to install several Octave versions in parallel (see “Time travels” above). Singularity is clearly the choice for archiving or sharing images. This is in particular interesting for research projects, where all Octave setups should be at best equal and unaffected by updates or system changes. Podman, despite all praises by RedHat, had problems when running the Octave Docker images as non-root user. For example dealing with the default internal container user “jovyan” or the GPU and graphics support has still some flaws.

Finally, thanks to GitHub Actions and DockerHub, maintaining the introduced infrastructure comes almost for free.

(C) 2017 — 2022 Kai Torben Ohlhus. This work is licensed under CC BY 4.0. Page design adapted from minima and researcher. Get the sources on GitHub.