Automated Continuous delivery (CD) is my hope to ease the tedious task of creating and publishing Octave releases and release candidates. As said before, now every day a stable release happens (if there were changes to the Octave stable branch) with no manpower needed at all.

When releases happen that frequently, users and developers must be able to judge themselves, if an automatically built set of release files is “good” and complete.

After a Buildbot Worker finishes his duty, the relevant build artifacts are copied to the Buildbot Master, stored with the Octave Mercurial (hg) ID, as shown in the screenshot below. 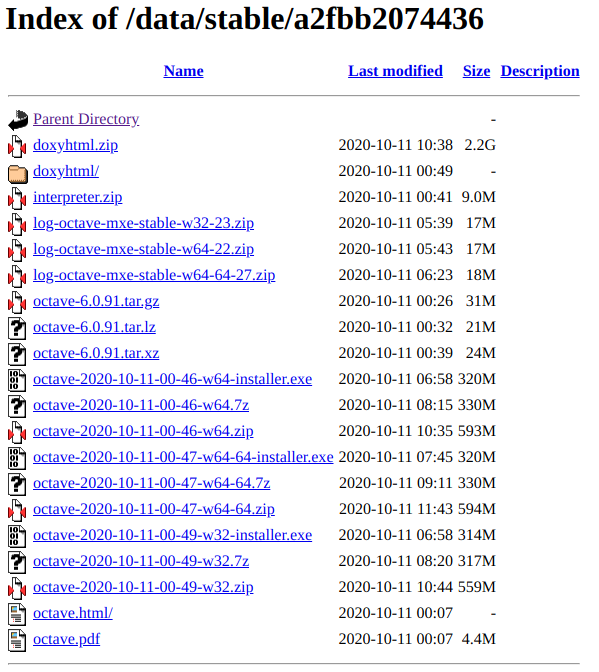 This looks unattractive and this folder view lacks any information about the corresponding build processes done by the Buildbot Workers.

Fortunately, Buildbot allows to create custom dashboards. The result can now be seen on the landing page of https://octave.space or on the screenshot below. In this dashboard the build artifacts are connected to the respective build processes including their status. The arrangement of those many MS Windows installers is based on the well-known Octave website https://octave.org/download#ms-windows. Furthermore, each Octave build entry clearly states the version label, hg id, and build date. Another feature is, that the GNU Octave user manual and Doxygen documentation can directly be viewed online to find potential flaws in them.

Trust me, I’m a Buildbot Worker

Especially, when automation and many systems are in the game, there should be a way to make sure, that the final installer downloaded from octave-buildbot is indeed that one “brewed” on the Worker.

To achieve this, before copying the files to the Buildbot Master, the SHA-256 hash sum of each file is displayed in the Buildbot Workers build log. 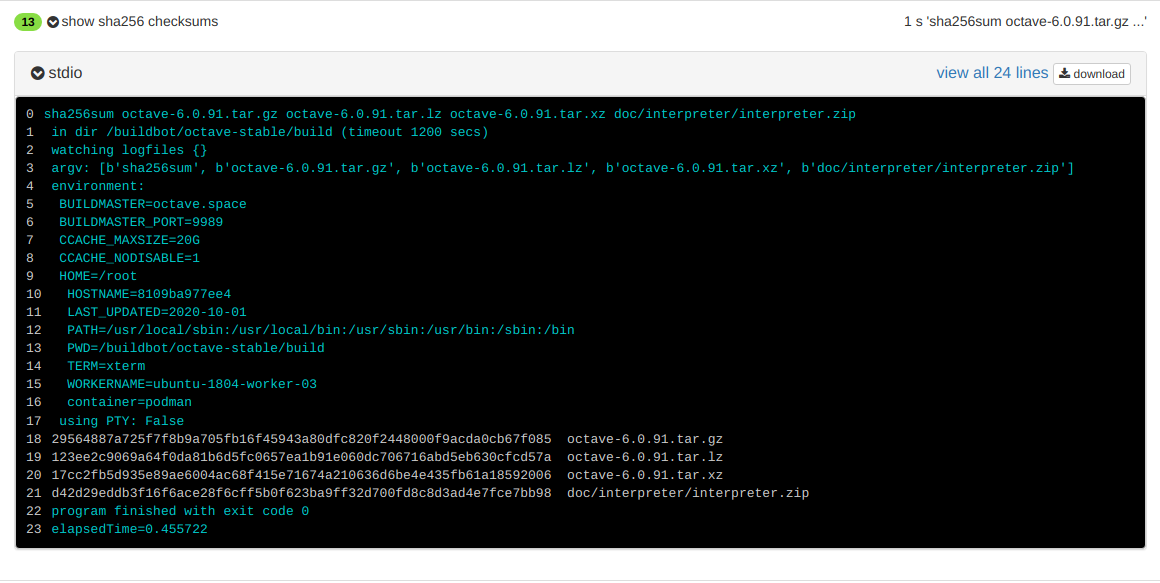 Admittedly, it is a little clumsy to find those hashes. Their main purpose can be seen as check for damaged or incompletely copied installer files to exclude sources of errors.

Speaking of errors, for the heavy weighting mxe-octave builds, even in the event of a build error the valuable log files are compressed and copied to the Buildbot Master. Because of this, there might sometimes be more than only one build log for a particular mxe-octave build available. They can be distinguished by the build number suffix. The installer files themselves have a timestamp in their file name.

Running octave-buildbot binds a certain amount of computational resources. The numbers given in the following table can slightly change in the future, but didn’t change significantly in the last weeks.

In the current setup [note 1] [note 2], each Worker is expected to provide 4 CPUs. This value can of course be adjusted.

The GNU Octave stable release tasks are dived into five “Builders” (Buildbot slang). The Builder “octave-stable” has to run first and the remaining four Builders can run in parallel after “octave-stable” finished successfully.

This way the worst case time can be reduced to about 14 hours, if four Workers work on them in parallel.

A single Worker would need 50 hours for all Octave release tasks and the goal of one release per day would be out of reach.

According to Table 1 and footnote [1], each Buildbot Worker must provide in worst case about 75 GB of disk space.

In contrast to the Workers, the Master only has to serve the build artifacts and coordinate the tasks run by the Workers. This does not require much “computational power”.

The current setup of https://octave.space assigns 65 GB in total to store Octave releases. This means roughly the last seven Octave releases are available and get automatically deleted once a new Octave release build starts.

Open issues, if you want to jump in

As of today (2020-10-16) there are four open issues about octave-buildbot on GitHub. It would be nice if they are fixed, but those do not disturb the release process significantly (workarounds exist).

All in all I am very happy to enjoy a “fresh brewed Octave” every day and hope to be able to run the system for a long time on little own expenses.

Thanks to the use of (Docker) containers, this system can reliably release Octave on almost arbitrary machines with little setup and maintenance effort. On the other hand, the computational resources and storage requirements (4 CPUs and 75 GB per Worker and 70 GB for the Master) are not negligible and can hopefully be tuned a little in the future by binding a certain Worker to a particular task (see the small discussion with Markus).

Please contact me on GitHub if you have suggestions for improvements or you find any issues with this system.